In these disruptive times, many a CEO is tearing his (or her) hair out. With each passing day, the world becomes more complex and changes happen fast. Business leaders realize... 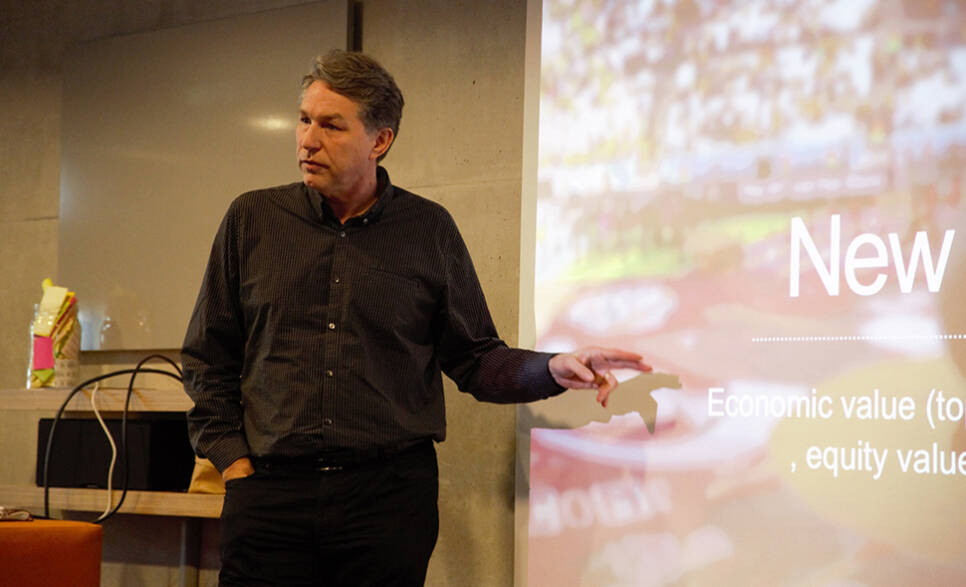 The 9 building blocks in order to survive the storm

According to Wollaert, having a clearly defined vision (1) is a first core value that managers can’t be without. “Without a transparent vision you’re nothing. A manager must think long and hard about the essence of his company. What are we engaged in? Why do we exist? Are we still relevant enough to our clientele?” According to the ex-top man at Coca-Cola, those are crucial questions where managers – more than ever before – need to have a telling answer to. “After all, these days, as a company, being profitable is not enough. Increasingly, companies are expected to underscore their relevance. Think, for example, of Zuckerberg who, besides making Facebook a success, has clearly expressed his ambition to get everyone in the world on the Net.”

"A manager doesn’t necessarily have to come up with all the answers himself. But he should surround himself with the right people who are capable of that."

“Besides having a vision, managers should also dare explore new avenues (2),” Wollaert argues. “everything, these days, is interconnected. For instance, healthy eating and CO2 emissions are inextricably linked. The physical and digital worlds too, are increasingly interlinked. To make those connections, managers should urge staff to think outside their particular discipline and be inspired by solutions outside their own industry and comfort zone.” Above all, says Wollaert, managers should motivate their people to be insatiably curious. “Marketers should understand the inner workings of the supply chain or, alternatively, what challenges Finance has to face in order to better understand everything.”

"Without a transparent vision you’re nothing. A manager should think long and hard about the essence of his company. What are we engaged in? Why do we exist? Are we still relevant enough to our clientele?”

Simplifying matters and, as a result, keeping one’s focus (3) is, says Wollaert, the third key characteristic that managers need to master. “Having identified problems, managers need to think up a simple solution that gets right to the heart of the matter,” says Wollaert. “Naturally that doesn’t mean that the manager himself, has to come up with all the answers. But he should surround himself with the right people who are able to deliver.

A good example is how Steve Jobs at Apple made designer Jony Ive the number 2 in the company. Ive’s design thinking ensured that Apple made the right choices, based on that philosophy, and turned them into operational decisions. And Apple did well out of that. If you want to innovate, principles like that are hugely important.”

“Managers also have to have the courage to begin innovating, just like that (4),” Wollaert continued. In his view, managers should do that at three levels: incremental (innovation projects that last between six months and a year (e.g. Coca-Cola that does an iteration to the taste of Fanta), adjacent innovation (Coca-Cola that, for example, enters the milk industry) and, last but not least, disruptive innovation (where it shoots off in a completely different direction that is totally unrelated to manufacturing soft drinks). But, says Wollaert, that doesn’t mean that managers have to do it all by themselves. “Following innovative paths is best done by hiring the right people, building internal ecosystems or forging external partnerships. The main thing is to simply go ahead and do it.”

"Managers who encourage their people to take decisions for themselves, are also regarded as a huge source of inspiration."

“One of the key characteristics, therefore, that managers need to possess, is the ability to inspire others (5),” Wollaert continued. “Managing people is decreasing in importance as internal control systems start to take over that function. Consequently, middle management is becoming redundant. In any case, managers who are constantly looking over people’s shoulders stifle inspiration,” warns Wollaert. So, to inspire people, managers need better mental equipment. “Information is power, it’s often said, but if you believe that, then you’re still living in the 20th century. Transparency is the buzzword these days. Managers who are prepared to admit their own shortcomings, are often viewed, by staff, as hugely inspiring. I know this from my own experience,” explains Wollaert.

“It’s OK for a manager to hold his hands up and say: ‘Look, these are my limitations’, and to therefore surround yourself with people who can offset your shortcomings. Managers who encourage their people to take decisions for themselves, are also regarded as a huge source of inspiration. By letting employees solve a certain problem themselves, you initiate learning pathways for them to develop along. In addition, they often come up with highly innovative solutions, and often to the good of the company.”

“Managers have to laterally break down organizational silos, certain redundant structures or geographical obstacles. Their remit is to re-connect all the component parts of the company (6),” explains Wollaert passionately. “But that is easier said than done. All too often, the sole criterion when assessing a going concern, is the cost argument. But we must also see the non-cost factors, and have the courage to tackle siloed operations. Managers who deliberately put up barriers are not doing things right. You won’t be competitive in the outside world if you compete against each other internally. That is unacceptable. Your goal: to unlock, or awaken, the latent knowledge within a company to optimize internal operations. It’s as simple as that.”

"The more data you generate, the more insights you’ll gain, the smarter you become and your company’s future will become that more predictable."

Make no attempt to disguise the importance of data. “The CEO plays a prominent role in the digitization and data generation of (7) of his or her company,” argues Wollaert. “Granted, most companies operate in the physical world, providing services, products or machines. But that physical world will, very shortly, need a digital lens. Every transaction, nowadays, in that ‘real’ world leaves behind ‛digital fingerprints’. Digital behemoths, such as Google or Facebook, have even had to attune their entire business model to that. The more insights you’ll gain, the smarter you become and your company’s future will become that more predictable.”

"Managers who deliberately put up barriers are not doing things right. You won’t be competitive in the outside world if you compete against each other internally."

“Another crucial aspect that managers of Today and Tomorrow will have to carry on doing, is managing (8) operations. A constant focus on making continuous improvements in company operations remains a necessity,” said Wollaert.

“Last but not least, the style of communicating (9) is a gigantic added value that CEOs need to get better at,” asserts the ex-top man at Coca-Cola. “It’s precisely by applying the communication and  storytelling correctly that you convincingly render your leadership,” explains Wollaert. “Managers need to hammer home the values that they believe in. In other words, as a manager, you can never over-communicate. There’s no such thing. Don’t expect either, after one rousing, inspiring speech, that your whole company will suddenly go wild with enthusiasm. Employees will often adopt a wait-and-see attitude. Only after repeating the values again and again that you – as manager – believe in, will employees begin to change their behavior.”

“Whether you work in an SME or an international giant, the building blocks of a corporate culture where innovation forms the backbone, are embodied in these nine principles,” explains Wollaert. ‛Managers of the Future’ are those who – together with their management team – manage to set out a holistic approach in which they, as a team, ensure that these principles are actually converted into daily practice.”