My interview with practical philosopher (at Google, Facebook, Twitter and many (fin)tech start-ups) and Askole Founder Andrew Taggart about asking fundamental questions, burnout, the nature of work and humanity’s identity... 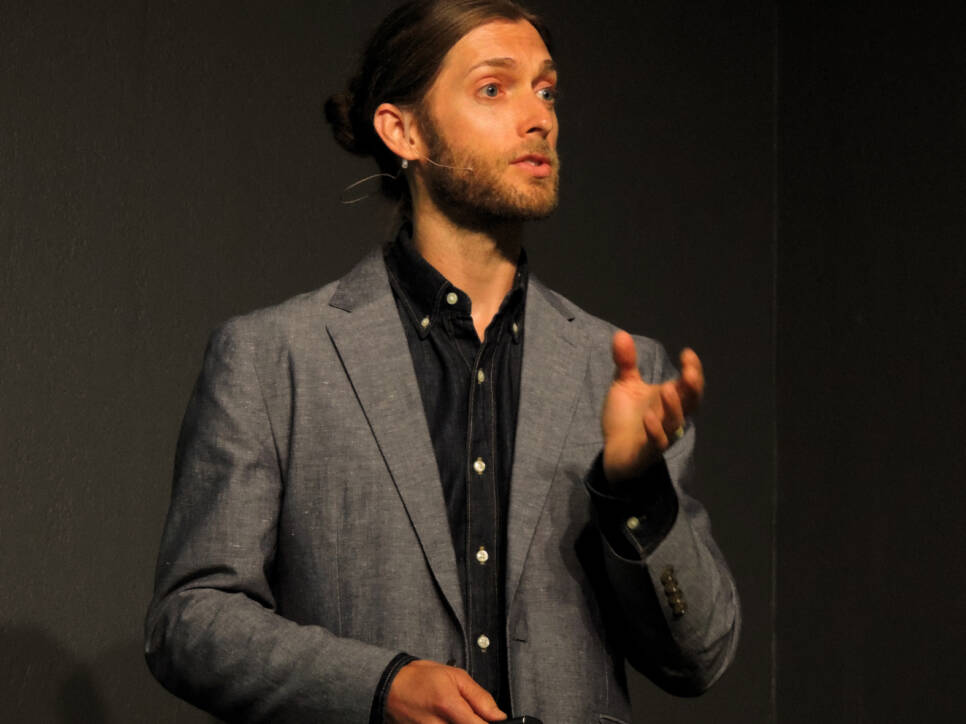 For the past few years there has been quite some buzz about corporate in-house philosophers like Joshua Cohen (Apple), Luciano Floridi (ex-Google) and Damon Horowitz (ex-Google). Intrigued, I investigated what philosophy could mean for companies, especially on the topic of innovation and decided that the best way to know more was just to start a conversation with one of them. So I contacted practical philosopher and Askole Founder Andrew Taggart, who has collaborated with many C-level executives, start-up teams, and venture capitalists at Google, Facebook, Twitter and many (fin)tech startups.

What follows are some of the highlights of our talk, but you can also listen to the full nexxworks Innovation Talks podcast episode here (you really should, it’s the type of conversation that allows you look at the world in a very different way):

First, let’s start with the very basics, for the laymen among us (I know I was): what is philosophy? Though Andrew began by stating that it's notoriously difficult to define, he did offer his own interpretation: “I’m mostly interested in the kind of philosophy that is concerned with asking and seeking to answer the most fundamental questions of human existence. That's the first part of the definition. The second part is that we also want the lives we live to be the best answers we've come to so far.”

Simply put, philosophy is about asking and answering some of the world’s most basic questions, including the ones about how to live our own lives.

“If you formulate a solution to a problem, you tend to make a lot of assumptions”

Now, what makes philosophy so useful in organizations is just that: it helps us (re)consider matters on the most fundamental of levels, something a lot of us forget among the hussle and bussle of our day-to-day work. For instance, organizations tend to think in terms of “problems and solutions” rather than “questions and answers”, the difference between which - as Andrew pointed out - goes far beyond semantics. That’s because, if you formulate a solution to a problem, you tend to make a lot of prior assumptions.

Let’s take his practical and very common example of burnouts: some people are claiming that the solution to burnout could be a four-day workweek. This clearly makes the assumption that burnouts are caused by too much work and that giving more free or personal time to employees will solve that. Now, that could be (partly) true, yes. But a philosopher would take that situation, and look at it from many sides, until he would start to analyse and question the very nature of work and how modern society makes the mistake of equalling work with identity. A lot us tend to feel that “We are what we do”, but we are of course much more than that. (Read about Andrew’s three steps for ‘workers’ to re-engage with life and re-identify themselves beyond their jobs.)

“We need to methodically unpack some of the assumptions surrounding the work identity”, stated Andrew. “It might make sense at the end to dial it back to a four-day work week, but not until we have examined the foundation upon which everything rests. If we don't actually philosophize and we just get involved in solutions, then there is a very big chance they will be ineffective.” Burnout is just as much a question of identity crisis as it is about working too much, and that necessitates a very different type of answer.

Getting beyond business as usual

This type of fundamental thinking is what makes entrepreneurs and innovators on the one hand and philosophers on the other such a good match: “Both are trying to create new things and get beyond business as usual”, explained Andrew. “Philosophy, too, is interested in uncovering the assumptions which underlie ‘business as usual’. They're interested in a creative way of being in the world.”

Although it does take a certain type of company to work with a practical philosopher like Andrew: “My joke is that philosophers tend to be the end of the line. You've most probably already gone calling elsewhere. You've tried out different approaches - a coach or a consultant, maybe - that were not necessarily bad, but also not the ones to tackle the questions that you wanted to have answered. So obviously, I’m not speaking with every tech firm in the world. I'm speaking with the ‘weird’ ones, the open-minded ones, filled with interesting and wonderful people who are not just concerned with efficiency: those who ask questions that go beyond success, performance, productivity, manageability or services and products that can be bought and sold, though they are obviously also concerned with these.” Before you categorize those 'weird' companies as negligeable outliers, know that Andrew has worked with Google, Facebook and Twitter, among many others.

Above all, the companies that are open to working with practical philosophers like Andrew are not afraid to examine challenges like “what kind of responsibilities do we have to the world?”. And it is exactly this type of social and environmental challenges - like climate change, poverty or privacy - which are extremely relevant today. “It’s not a coincidence that this type of philosophical questions often surfaces in the tech space”, explained Andrew, “as a lot of these organizations are so incredibly powerful and wealthy. They're having such huge impact on the lives that we lead, changing the face of the modern world, and so quickly.”

But technology’s impact goes further than environment and society. Artificial intelligence has put humanity in an identity crisis of sorts, according to Andrew. “We human beings have almost always sought to understand ourselves in relationship to what is similar to us or what is different from us. For instance, we used to compare ourselves to God, but since what Nietzsche called ‘The Death of God’ we have been looking to the other side, asking ourselves “are we like or unlike nature or machines”?” For a very long time, we thought that humans were special because of their intelligence. But since then, we have discovered that a lot of animal species are a lot more intelligent than we thought (octopuses, chimps, dolphins, crows, pigs, etc.) and we have designed technology that is starting to behave as if it were intelligent in certain respects (we’re not there yet, of course). “All of this adds up to the fact that we're getting to the point where we don't know who we are. We no longer know what it is that makes us human. I don't think people are just concerned about losing their jobs to automated driverless cars. I think rather that people are concerned about losing their identities.”

And that may very well be the reason why philosophy is so much on the rise - not just with in-house corporate philosophers but with philosophical influencers like Yuval Noah Harari and Nick Bostrom too - because the changing world order and its impact on our identity, as “workers” in particular and “humans” in general, leaves us with a lot of unanswered fundamental questions. To put it in Andrew’s words: “philosophy often resurfaces at various moments in history when one order is collapsing, and another order has yet to arise.” If you need a reason why philosophy seems to be more relevant than ever, then surely that’s the one.

Andrew and I talked about many more fundamental life questions, among which the need for a new metanarrative, ethics, wisdom, the (in)ability to feel close to 7 billion people and “bullshit” (as in Harry G. Frankfurt’s famous book ‘On Bullshit’) concepts like “global communities”, so do yourself a favour and listen to the full podcast here.