Entrepreneur Jeroen Vertongen talks about the ACES future of mobility and how he keeps adapting his company to the new reality to survive. 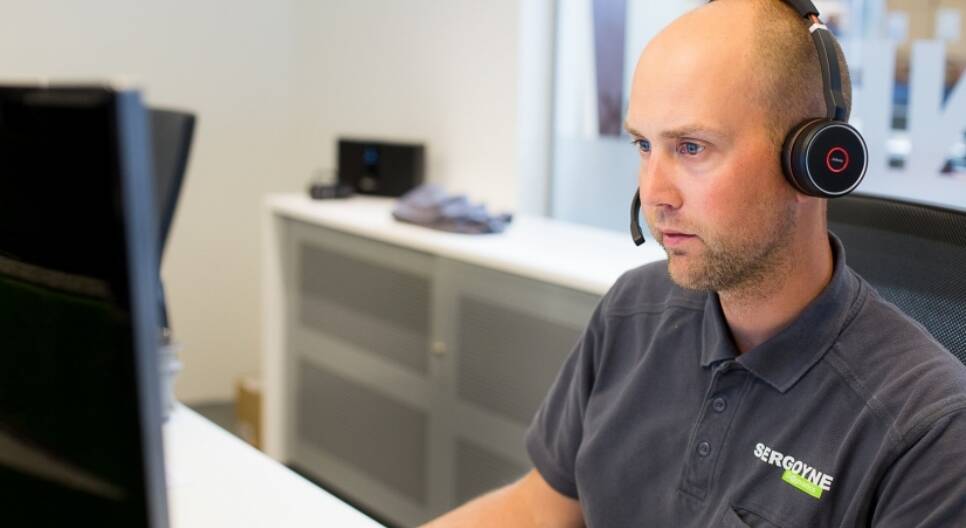 When the automotive sector underwent an electronic transformation in about 2008, Jeroen Vertongen converted his conventional garage into a diagnostic center. And now – ten years later – with a new technological revolution, once again, turning entire business models on their heads - the entrepreneur is changing course once more. “The future is ACES: autonomous, connected, electric, shared. You can either stick your head in the sand and go out of business, or you can adapt yourself to the new reality... and survive!”

After finishing his studies, Vertongen got into his parents' business: a conventional car-garage. When their parts supplier Sergoyne was put up for sale, he decided – together with his wife – to take it over. “We expanded the business straightaway, and – besides car parts – began specializing in car diagnostics. The automotive sector underwent a major transformation in 2008: more electronics got put into new cars, and many a garage had no answer to that. Not only did we begin to supply diagnostic equipment, but we also set up a technical support hotline and started to give training on a large scale.”

Ten years after the electrification, the automotive sector is in the throes of a new transformation, said Vertongen. “2018 is 2008 all over again. Only this time, the transformation is going much faster and much deeper than back then. In 2008 it was a technological transformation, pure and simple. This time it's different. Besides a technological revolution, business models are being turned on their heads.”

On the ‛Innovation tour' with nexxworks in Silicon Valley, Vertongen saw that the future of cars would be ‛ACES’: autonomous, connected, electric and shared. Once back in his own country, however, he noticed that people here weren't yet tuned into that message. “Over the years I have given many a lecture and, each time, there was disagreement between believers and non-believers. In absolute numbers, the rise in the number of e-cars on our roads is, admittedly, not spectacular, but that number is doubling with each passing year. That is exponential growth. The number of young people not bothering to get a driving license, is rising dramatically.”

"With each new lecture I hear an awful lot of garage-owners mutter: ah, those driverless cars will never make it into general use"

“With each new lecture I hear an awful lot of garage-owners mutter: ah, those driverless cars will never make it into general use". Well, wake up, as they are out there already… and not just in Silicon Valley. I went to Lyon recently to see the driverless cars of French pioneer Navya. And, even closer to home, the cities of Kortrijk and Ghent have plans for small, driverless shuttle buses. Granted, to begin with, this will be on fixed and limited bus routes only, but heh, this is just the start.”

“Follow the money, the big tech giants are currently plowing billions of dollars into battery storage and driverless cars. That's the future”, said Vertongen. “As a garage-owner, you can either stick your head in the sand and go out of business, or you can adapt your business model to the new reality... and try to survive!”

Will the revolution erupt via Colruyt or Carrefour?

Vertongen is convinced that the ACES-revolution will turn the whole sector on its head. Vertongen: “For some time now, a fierce battle has been waging for dominance of the network”. “Makers of conventional cars are already getting competition from the Googles, Amazons and Ubers of this world. Starbucks, for its part, is considering laying on free transport for commuters. They'll travel smoothly to work, in small, electric, driverless shuttle buses, have a coffee en route and eat a donut. As that's the main goal for Starbucks, in all that. Why should it continue to rent pricey sites for its coffee shops, if it can make those points of sale mobile, for a fraction of the price? Who knows, maybe the big breakthrough in driverless cars will even come from Carrefour or Colruyt?”

"We are evolving towards a subscription-based model. Owing a car will then become old hat. You'll simply order one, like you would a film on Netflix and then, a few minutes later, one will roll up at your front door"

"We are evolving towards a subscription-based model. Owing a car will then become old hat. You'll simply order one, like you would a film on Netflix and then, a few minutes later, one will roll up at your front door". The power base is shifting from the carmakers to the service providers. Does your average airline passenger know if (s)he flying on a Boeing or an Airbus? No, he flies with Brussels Airlines or with Ryanair.

In the future it won't matter if you normally drive a BMW or a Toyota, your provider will dispatch a vehicle that's right for you at that juncture. For one occasion, that might be a break with a spacious boot, another time it could be a compact city car, that's easy to park in a tight parking space.”

That evolution needn't be a threat, said Vertongen, to present-day garages. On the contrary, it opens new doors for them too. “All those providers will need service centers, specialists who recharge, clean, service and repair their fleets of vehicles. Not to mention the startups like Navya– of which there are hundreds in China alone – that are currently developing driverless cars. Although they have the technology, they don't yet have the network to manage a whole fleet of vehicles. So, there too, lie many business opportunities for garage-owners.”

Vertongen is not one to remain idle. In 2008 he capitalized on the transformation in the sector with a startup called 'Sergoyne Diagnostics'. More recently he held a startup called Moobi above the baptismal font. “Our intention, with Moobi, is to capitalize on the evolution facing the car in the years to come. Step one is the selling, renting or leasing of recharging poles for e-cars. But we also plan to develop the Moobi-app, Moobi-centers and even a Moobi-car.”

“ACES will become a reality far sooner than we think. The technology is in place already, that's step one. Step two is the mindset of the customer, which doesn't evolve as fast. There is still a lot of distrust out there, but that's more a case of unknown, unloved. Make no mistake: one short trip in a driverless car, and, before long, you'll no longer consider a car with no pedals and no steering wheel bizarre. The third and last step is the legislation, which is the slowest part, and tags along behind”.

At a tipping point

“But, by 2025, I predict that 25 to 30 per cent of the cars sold in Belgium will be fully electric”, said Vertongen. “The vehicles on offer are increasing in number and becoming more affordable, climate pressures are increasing all the while, we are on the threshold of the big democratization of e-driving. Driverless cars have been seen, thus far, in closed circuits: between the hospital and the car park, from the edge-of-town car park into the town center, at big events,… But – take it from me – from 2030 onwards, they'll become part of our street furniture.”

“We're at a tipping point. I'm already seeing many a garage-owner quit because they are unable (or unwilling) to make the necessary investments in the technology, and because the new generation of service mechanics don't possess the requisite expertise. If those still in the game don't seize the nettle now and adapt their business model, well, they'll go the same way.”

This interview first appeared on Bloovi in Dutch.