If you want to learn more about innovation in India, follow these 7 top speakers 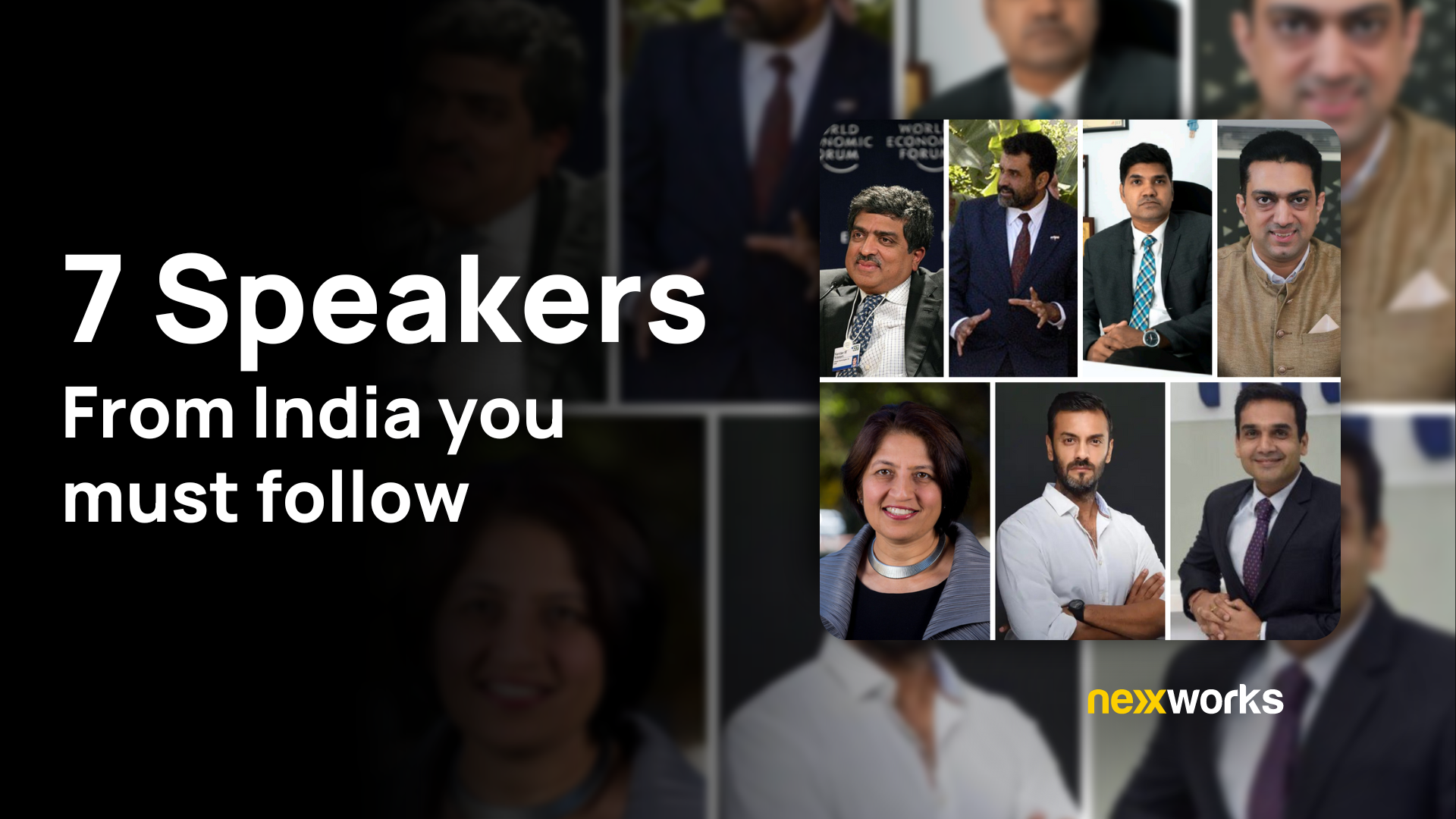 According to investment management and financial services company Morgan Stanley, India will become the world’s third largest economy by 2027. In fact, it has recently overtaken the UK, its former colonial master, to become the fifth-largest economy in the world. And according to McKinsey, India will become the talent factory of the world as it will hold 20% of the globe’s working population by 2047. While China contributed to over 30% of the world’s economic growth this past decade, India stands tall as the next beacon for the world’s growth and stability with a projected GDP growth of over 6% until 2030.

It’s definitely a great idea to keep an eye on India when it comes to business and technology, being aware of:

Here are 7 top speakers, authors and thinkers to help you achieve just that.

Nandan Nilekani is the co-founder of tech giant Infosys and has been its non-executive chairman since 2017. Nilekani left Infosys in July 2009 to serve as the Chairman of the Unique Identification Authority of India (UIDAI. As chair of the UIDAI he was responsible for implementing the Multipurpose National Identity Card, or Unique Identity Card (UID Card) project in India. This initiative aims to provide a unique identification number for all residents of India and will be used primarily as the basis for efficient delivery of welfare services.

Nandan Nilekani is currently chairman of EkStep, a non-profit literacy and numeracy platform. Set up by the Nilekanis with an initial commitment of US$10million, Este looks at solving the ‘learning problem’ by creating a technology-led platform to help children in improving their learning outcomes early in their lives. Nilekani is also President of the Governing Body of the New Dehli based National Council of Applied Economic Research, India’s largest and oldest non-profit economic research think tank.

In 2006, he was named Businessman of the Year by Forbes Asia. In 2009, Time Magazine placed Nilekani in the Time 100 list of World’s Most Influential People. India Today ranked him 12th in India’s 50 Most Powerful people of 2017 list.

Shayamal Vallabhjee is a Sports Scientist with a double Masters in Clinical and Organizational Psychology. He is a course facilitator with the Stanford Business School LEAD Program on Effective Team Management and Value Based Leadership. He has been a 4 x TEDx Speaker, INK Fellowship, Men’s Health Trainer of the Year, Global Spa Wellness Guru of the Year, and an avid ultra-marathoner and mountaineer.

Shayamal has worked in the capacity of a High Performance Coach to elite athletes, sports teams and executives for more than two decades. His work in Peak Mindsets and Flow States blends evidence based science, behavioral psychology and ancestral wisdom. Shayamal lived as a monk for three years at the Hare Krsna Temple in Durban, South Africa. He has hosted shows on Star Sports and ESPN and has been featured in four National Geographic Documentaries as an expert.

Anju Patwardhan is a globally experienced board director, investor, and banker. She’s a Fulbright Fellow and Visiting Scholar at Stanford. Her research is focused on the use of technology and innovation to support financial inclusion and financial well-being, especially small business lending. She is a member of the World Economic Forum (WEF) Global Future Council on Blockchain and on the WEF steering committees for “Internet for All” and “Disruptive Innovation in Financial Services”. She has been appointed as a FinTech Industry Expert with UC Berkeley (SCET) and an Innovation Fellow with the NUS.

Amit Mookim is an experienced business leader with a blend of consulting and operating experience in a career spanning 19 years with extensive work across Healthcare, Technology & Analytics and Private Equity Advisory. He is currently the Managing Director at IQVIA, a Fortune 500 organization and a leading healthcare information, technology and research organization. At 32 Amit became one of the youngest Partners and Sector Head at KPMG, leading their Strategy and PE Advisory Practice in India, across Financial Services, IT/ITeS, Real Estate, Food with a special focus on Healthcare.

He is on the Board of several National Industry Forums on Healthcare & Private Equity/ Venture Investing. He also mentors start-ups and actively promote the cause of entrepreneurship and innovation in healthcare.

TV Mohandas Pai is the Chairman of Manipal Global Education Services and Aarin Capital. In 2000, Pai co-founded Akshaya Patra, the world’s largest midday meal program and works actively with government and regulators on policy recommendations and guidelines. Today the program feeds over 1.5 million children daily in more than 8,500 schools across nine Indian States.

TV Mohandas Pai has also served as the Chairman of the Board of SEBI and is now a Board Member of the National Stock Exchange in India. Until Mid-2011, Pai was a Member of the Board at Infosys Limited. He joined Infosys in 1994 and was the CFO from 1994-1996, when he played a strategic role in transforming the company into one of the world’s most respected and well-known software services companies based out of India. TV Mohandas Pai was a key player in the development of the IT services industry in India. He was also instrumental in instituting India’s first employee stock option plan, enabling employees across Infosys to be part of and consequently to share in the wealth creation by the company.

Gautam is known to partner with entrepreneurs and corporate professionals to build meaningful, long-lasting relationships by applying the 'breaking bread' philosophy so that they can make a difference in their lives, and transform their companies to achieve greater heights of success.

Alan is a serial entrepreneur and HR professional. He has transformed careers of more than 10k+ professionals Pan India & Globally. His current expertise is in CXO, Global Search & growth hacking across Industries. He is a patron Management Consultant for over 20 management colleges & Training Institutes in Mumbai, Navi Mumbai, Pune & Karnataka. He is a management graduate from a premier Institute and also backs certifications in LIII, AIII, FIII, CIS from Insurance Institute of India.

He currently spearheads Mumbai Rozgaar Private Limited and its brands: Abhyaasa Institute of Talent Transformation (AITT) & Alan Cyril. His aspiration currently is to be the most preferred Partner for HR Recruitments, Learning & Development & BDO Services.

15.10-> 20.10- 2023
India
Get front row access to the latest scoop and new upcoming experiences, bundled into a monthly newsletter
Thank you! Your submission has been received!
Oops! Something went wrong while submitting the form.