Nexxworks Partner, innovation thought leader, author and keynote speaker Rik Vera talks about why the future of happiness, and business, might lie in Dubai. 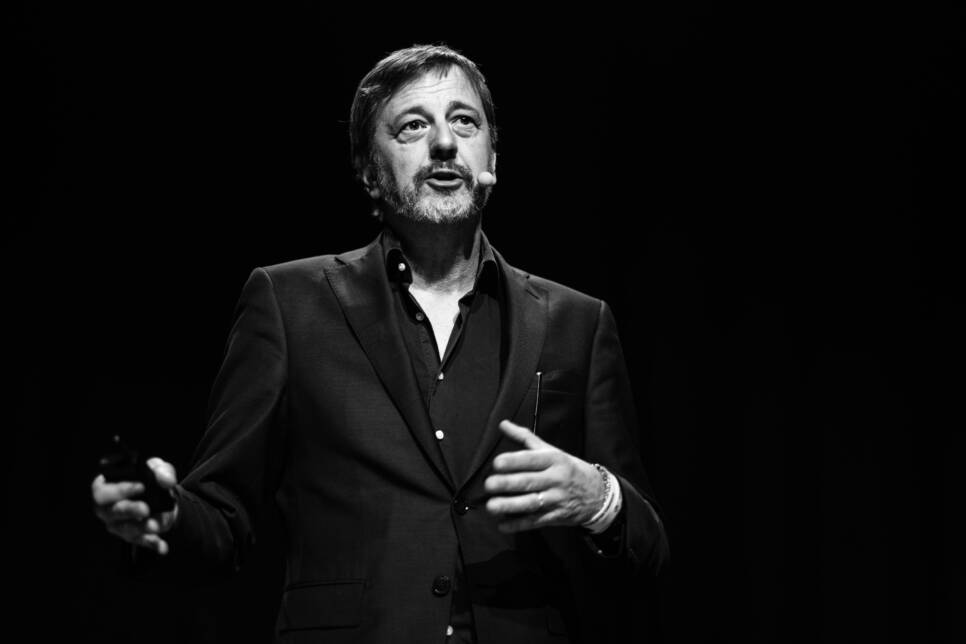 Dubai, that’s just sand, oil and the Burj Khalifa, right? Wrong, says nexxworks Partner Rik Vera. The Gulf city is rapidly using its oil money to transform itself into the digital age. Which is why Rik is guiding a nexxworks Tour there in November of this year. Ahead of that trip we talk to him about how Dubai puts happiness in front, why data is crucial for that transformation and what European businesses can learn from the city.

“We’re used to taking people to places like San Francisco, Shenzhen or Tel Aviv”, Rik starts. “So people often ask us: ‘why Dubai?’ Well, because Dubai will host the World Expo of 2020, and ahead of that event it’s experimenting with a very interesting concept: by 2020, they want to become the happiest city in the world. And if there is one thing that large corporates can learn from that endeavour, it’s how such a large structure is able to reinvent itself so thoroughly and so fast.”

And this isn’t your Las Vegas type of happy. It’s a conception of citizen and consumer happiness that’s deeply embedded in digital and data. But according to Rik, to understand this we need to take a step back, and look at the history of digital technology. “I think technology moves in waves”, he says. “The first one happened around 1993 with the introduction of the internet, which is still ongoing. And with it we got companies like Amazon and Booking.com. They took existing business models and put them on the internet.”

Next up, smartphones brought us the second wave. “This one took off around 2007 with the introduction of the iPhone”, says Rik. “Which in combination with social media changed our society drastically. Things we only checked once or twice a day from our computers suddenly became accessible all the time from apps. Our entire world was ‘app-ified’, and consumers became the centre of the world.”

The third wave hit us shortly after. “This was the platform economy”, continues Rik. “Companies like Uber and Airbnb took the internet and apps, and used it to allow consumers to sell to other consumers. They cut out the middleman.”

Which finally led us to the fourth, and still approaching wave. “Those three previous waves generated a lot of data”, concludes Rik. “And now we’re finally seeing the potential it holds for our wellbeing. Which is precisely why we’re going to Dubai. They combine big data, automation and AI to build happiness for their citizens. And if you’re in a business that went through the previous three waves, it’s essential you learn to do the same for your customers.”

From oil to no traffic jams

So what does this fourth wave look like in Dubai? Well, it all starts with data. The city collects data on everything from public roads to shopping patterns, and uses it to generate happiness. They for example use data to reduce traffic jams, which in turn improves the quality of life of commuters. But that’s just a basic example. “This principle also extends into, say, physical retail”, continues Rik. “Here data can make shopping trips smoother and more entertaining. Again increasing the quality of life. And even offices can use an upgrade. Many of them make us sick and unproductive because of their ventilation systems and interior design. But by analysing air quality or how people move through workplaces, we can change them and make ourselves more productive.”

Essentially Dubai uses data to make everything smart. “They use data to build happiness”, says Rik. “They use ones and zeros in a very smart way. So it’s no coincidence that a company like Uber is testing out their drone services in Dubai or that Virgin’s Hyperloop One will launch their tunnels there first. The marketing material might be about California, but the real thing is happening in Dubai.”

With this push for happiness, Dubai is also shifting its economy. “They realised that they already pumped the oil from their ground, but also that data is our new oil. And not just the raw data, but also the smart things you can do with it. They realised you need to build ways in which data improves lives, and help people achieve what they are looking for: happiness. And if Dubai succeeds in doing that for their own city, they will learn a lot and build algorithms that can be used in smart retail, smart cities and smart mobility worldwide. And those won’t be free of charge for other countries”, says Rik, laughing.

Happiness is key for business

And that’s not just a government matter, business should be looking at creating happiness as well. “When you think of it, everyone wants to create happiness, whether you’re a bank, a pharma company or an insurance company”, says Rik. “Fundamentally everyone wants to improve the well-being of their customers and of humanity in general. When these types of companies look at why they exist, happiness is something that always comes back. Yes, they want to sell products and services to the customer, but they also realize that happiness is the value, the currency even that they offer to their customers in return for actual money. Which is why Dubai is such an interesting experiment.”

Of course creating that kind of positive feeling is a balancing act, which companies will recognise from dealing with their stakeholders. “Dubai needs to create well-being for its inhabitants, but also for other groups like tourists or companies”, says Rik. “And it won’t be possible to create well-being for everyone at all times. So the balancing act is very important.”

“It’s easy to criticize their government for not being the most democratic, of course.”, continues Rik. “And we should definitely keep that mind. But when it comes to reinventing themselves for the future they are aspirational. This is a mind-set we may have lost in Europe, where we retreated into the ‘forever now’ instead of looking into the future. Dubai in the meantime shows how to be cutting edge and create projects that could shape our Day After Tomorrow in a radical way. Which is why we want to show the tour participants how they are improving housing, shopping and how to live happy lives.”

Which is not to say the US or China don’t have their own strengths, of course. Nevertheless, Dubai is quickly putting its own mark on innovation. “You can build innovation in different ways”, concludes Rik. “If you are thinking about new technology, San Francisco is of course wildly interesting. If you are thinking about new business models, China is incredibly inspiring. But if you want innovation that will make your company future-proof and creates value for everyone, you need to go to Dubai.”