Jon Bird spent 36 hours in Shanghai in order to get a deeper understanding of what Alibaba's Singles' Day is all about, on the occasion of its 10th anniversary. He... 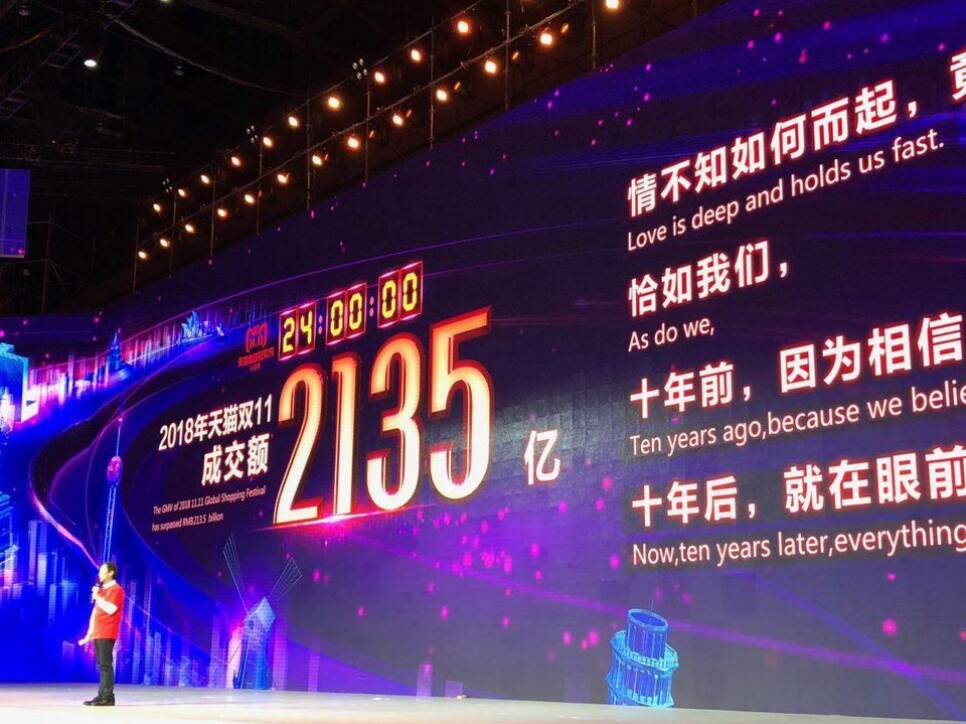 If you think you know Singles’ Day by the numbers, think again. Yes, the statistics are mind-boggling: $30.8 billion in sales in 24 hours as measured by gross merchandise volume (up 27% on last year), 180,000 brands taking part, one billion packages set to be delivered, the biggest sales event in the history of the planet. But the now-iconic images of the sales tally that flashed around the world, live streamed from Alibaba’s vast media center, don’t tell the complete story.

For 36 hours in Shanghai, I lived, ate, breathed and slept (the last one not so much) Alibaba in order to get a deeper understanding of what this massive event is all about, on the occasion of its 10th anniversary. I was part of a small group that was briefed by Alibaba’s top executives, attended the glitzy Gala opening, visited Alibaba’s “New Retail” stores, and learned about the innovation program that helps bring new products to market during 11/11. And of course, I watched, fascinated, in the tally room as the scoreboard racked up a million dollars in sales every few seconds.

I distilled what I saw and heard into 11 observations and insights, with the intention of adding some clarity and busting a few myths.

The day started in the early 1990s on Chinese college campuses as a celebration for singles. (When written numerically, 11/11 looks like “bare sticks,” which is an expression for those not in a relationship.) Alibaba co-opted the idea in 2009 and turned it into a one-day price-off promotion all about self-gifting. But as Alibaba CMO Chris Tung told us, it’s “evolved to become something totally different.” So the event has been rebranded and redefined as a shopping festival under the banner of “Double 11.”

The ramp-up to this year’s 11/11 was planned with military precision and featured multiple layers and a series of tentpole “countdown events.” The first was the “See Now Buy Now” fashion show, an interactive, live-streamed four-hour fashion show, broadcast across 10 platforms.

Ten days out, Alibaba launched another show, revealing the “must-buy recommendation list,” which was designed to be spread on social media. The content of the show centered on 50 sales reps, each given 90 seconds to convince the audience their product is the best. These were super salespeople—“the top of the top,” Tung says. “Some rap the product benefits; others perform magic.”

It all culminated with the 11/11 Gala, a four-hour broadcast that made its way not only onto Alibaba’s platforms like Youku (which produced the show) but also terrestrial TV stations. More than any other, this annual event cements the reputation of Double 11 as the “Superbowl of Shopping,” and appropriately, it’s held in Shanghai’s Mercedes-Benz Arena.

It's hard to describe: a crazy combination of pop concert, dance spectacular, game show, aerobatics display, telethon, interactive game—and somehow, somewhere in all of that, a pre-sales event. This year, we saw Aussie super-model Miranda Kerr, pop diva Mariah Carey, Cirque de Soleil and some of Asia’s biggest pop stars. Sometimes they performed signature acts; other times they pushed product or crooned songs written for the event like “Buy, buy, buy.” All of this activity was designed to prime the pump and secure pre-sales before the midnight kickoff. The more sales in the bank prior to the start, the more likely it was that 11/11 would be successful.

Alibaba sees old-school retail as, well, boring, and Double 11 is the pinnacle expression of a conscious shift from transactional selling to experiential shopping. Consumers don’t just watch and buy; they take part in highly immersive ways. Often this is via Alibaba’s Taobao or the Tmall app on their phone; Asian consumers in particular are welded to their mobile devices.

At the 11/11 Gala, for example, audience participants and viewers are asked to vote on show outcomes, play games to win special offers (e.g. mirror the emoji faces), and shake their devices to reveal “red packets” to earn credits and deals for Double 11. Outside of the Gala, there are interactive treasure hunts and augmented reality games.

Alibaba’s stated long-term goal is to get half of its sales from overseas, and 11/11 is increasingly a worldwide celebration. After Alibaba took control of Singapore’s Lazada, shoppers in six Southeast Asian countries could join in on this year’s Double 11, including Vietnam and Thailand. Further afield, promotions targeted millions of Chinese consumers in the U.S. and Australia, via delivery platform AliExpress.

While Double 11 is primarily conducted online, Alibaba is working hard to make it an omnichannel experience.

This extends to brand activations: I saw a pop-up in the IFC Mall in Shanghai with an interactive game where participants became a human claw machine, grappling to grab their share of potato chips. The event was also celebrated in 62 Intime malls and department stores across China, and there was an old-school Black Friday-style sales rush at midnight on Double 11 in EasyHome, China’s second-biggest home improvement and furniture chain operator. Alibaba’s own properties, like supermarket chain Freshippo (formerly Hema), also participated in Double 11.

Deals abound during 11/11, but it’s not purely a sales event. Chris Tung says that Alibaba asks itself, “How do we design a stage to enable products to shine?” Sometimes that’s a literal stage, as in the 11/11 Gala. Other times, though, it involves providing a platform for new product launches. Because of its scale and focus, “11/11 has become the most efficient way to launch new products,” commented Tung.

Via the Tmall Innovation Center, Alibaba works with brands, supplying data and insights to help create new products and packaging expressly for 11/11. This runs the gamut from the sublime to the ridiculous (to Western eyes and tastes, anyway).

This year saw the launch of Spicy Snickers and a special pack of Oreos that included a spicy chicken wing flavor (seriously).

The event has achieved such significance that most brands start the planning cycle at least nine months out, with some companies integrating the program into three-year strategic plans. So this is not about engineering last-minute deals; it’s about long-term planning.

10. It’s not just a competition for consumers; it’s an “Olympics for brands” in the digital era.

The image of a typical sale is shoppers fighting to the death over the sales rack. And there are elements of that in 11/11: a scarcity of deals, encouraging consumers to compete and “win.” But on the business side, it’s become a fight to the death for brands to achieve prime placement in 11/11. There are only so many top spots in the event, and companies have to be highly creative and innovative in the constructs and activations they submit to and plan with Alibaba. You don’t want to be left behind because that could affect your entire year’s sales.

Alibaba analyzes the oceans of data that emerge from 11/11 (as an aside, its real-time data visualization in the media center was stunning).

After Double 11, brands get access to the data from their sales (aggregated and anonymized), which can be mined to great effect for the other 11 months of the year.

The 11/11 Global Shopping Festival is unique and provides lessons for the rest of retail in how to build excitement and engagement with today’s consumer. In his closing remarks at the event, incoming chairman Daniel Zhang noted that 46% of 11/11 sales came from customers born in the 1990s and later—Millennials and Gen Z. This blend of retail and entertainment, of innovation and commercial pragmatism is fresh and appeals to a younger generation and mindset.

Will its momentum last? The market certainly has its doubts and has marked down Alibaba’s stock this year on concerns of global trade wars, economic headwinds at home and the retirement of charismatic founder Jack Ma.

Alibaba believes these fears are unfounded and has enormous faith in the continued expansion of China’s middle class (another 300 million in the next few years) and a corresponding rise in consumption, the company’s global prospects and its forays into “New Retail” (more on that in a post later this week).

Next year is significant and symbolic: 2019 will be the 11thanniversary of 11/11. I am sure that Alibaba has plenty of tricks up its sleeve to ensure that the event is bigger and better than ever before.

After all, the company's slogan for this year’s 11/11 was “just beginning,” and the message displayed on the mega-screen on the media center stage read, “Yesterday’s best is today’s starting line.”